HOEK-Have You Forgotten How Good It Is? ... by SBC


The Harwich-Hoek ferry service started in 1890 something. A century later 'Open Borders' came in and the Harwich-Hoek ferry was packed with baccy buying Brits (I know, I was one). There was even a tobacco shop in the Hoek terminal car park. Two decades later however almost no one uses it anymore, yet for those living in  East Anglia the ₤40 Ryan Air baggage charge and the Parking fee at Stansted mean it is a very good option for a baccy buying day trip. So here two pieces about my trip this last week...and what I really think of SH & The 'Ph0d.

I get asked that question by everyone I meet on my baccy runs to the Hoek. The Dutch Border Guard asked me, the girl at the supermarket tobacco counter asked me, the owner of the tobacconist asked, the steward in the Stena smoking lounge asked and the UKBA too.
Well you tell me if it is worth it: WHEN DID YOU LAST EARN NEARLY ₤500 FOR 24 HOURS ‘WORK’?
Dunno about you but it’s been a while since SBC was making that sort of coin. A very very long while...not since we had a Prime Minister who enjoyed eating curry...if you get my drift...?
Do the math; a kilo of tobacco in the UK is getting close to ₤300. In Holland its ₤100 or more accurately at today’s exchange rate a 1kg of GV is ₤109 (20x50g @6.5€ =130€). Bringing back around 3kgs a time-which is all I can comfortably carry as a foot passenger because I don’t buy pouches but tubs of tubing tobacco and they are bulky- is a saving of ₤600. Take off the cost of the ferry, food, fuel to the port etc and that leaves you with a saving of around ₤450-500.
₤500. That is a big chunk out of this winter’s heating bill dans Chez SBC.
AND IT IS ALL THANKS TO SMOKING HOT AND ZAPHOD!  That’s ‘writ large’ for a reason. Thanks to those guys we, The Clan SBC, might just get through the winter and Fuel Poverty. I’m old fashioned  enough to think that anyone who helps me and mine have food on the table is a hero and deserves praise and thanks in a BOLD font.
It wouldn’t be totally inaccurate to say that the N2D team has given me not only one such wad of cash but now several and the promise of more to come(I should point out here that by 'wad' I mean the saving I make and that I am NOT selling the tobacco illegally).

Why do I say that? Why is SBC going all gushy?
Well on the evening of the 02.02.2012 I returned to Harwich on the ferry with my old bundeswehr kitbag full of tobacco and the UKBA were waiting for me. Without all the lessons, schooling and information that SH has given us all-free of charge- I would have lost my tobacco. No question at all in my mind, because I know I would have said the wrong thing.
I call myself ‘SBC’ here but my other code name is “The Jigsaw” because when I’m confronted by uniformed authority I GO TO PIECES. You think you get nervous? I’m too embarrassed to upload the latest video of SBC v. UKBA. I’ve shown it to SH and a couple of others close to me but NO ONE else is getting to see it...not even The Bestes Frau In The World.
No joke. I go from being 6 ft of shaven-headed ex-criminal malevolence to a gibbering wreck.
But as nervous as I was, I did what SH has taught us and I pulled out my video camera, started filming. I almost threw my SOT at the UKBA officers and said simply, in a very shaky voice, “this is for you”!
A short discussion about the Rights and Wrongs of videoing (I feel another FOI coming on)... 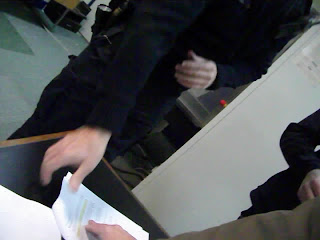 [officers reading the Video FOI]
...and much praise for the comprehensiveness of my SOT and I was on my way with my goods intact! 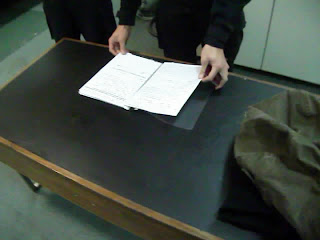 [UKBA Officers reading my SOT]
So look at the picture, which shows some of what I brought back and then tell me- was it worth it? 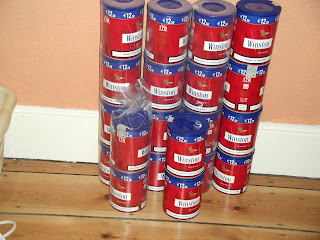 -----------------------
Baccy Buying In Hoek And About Stena
I go out on the 23:15 night ferry which means I have to pay ₤30 for a compulsory cabin in addition to the(winter price for foot passengers), ₤70 return ticket (cabin not required on daytime sailings). Stena Line is one of the few ferries that still seems to value their smoking clientele; they ask you not to smoke in the cabins and there is a 150€  ‘Cleaning Fee’ if you do, although I’m not sure if they ever get to charge anyone. I wouldn’t try smoking in the cabin bathrooms as they don’t have the same large extractor systems that P&O have in theirs and anyways they provide a separate, comfortable, warm and well ventilated indoor smoking lounge right next to the main lounge and bar. As it also has free Wifi a lot of smokers seem to spend the whole trip in there watching stuff on their netbooks or cell phones-and there are even a couple of power sockets. The food on board is quite good but a burger and chunky fries will set you back 8€ so you may want to take some sandwiches. Bringing a travel kettle will save you a fortune as coffee and tea on board are about 2€ a cup. The cabins have ample mains power sockets available, both Brit and European, but a travel adaptor is useful if you have many charging needs.
The "duty paid" shop on board is well stocked HOWEVER since the new MIL guidelines came in in October last, Stena has started to put up misleading notices which talk about 'regulations' and 'allowances'. I have also been told that the shop will refuse to sell you more than the guideline amount. So there will be an email on its way to the CEO of Stena line this week!
One small thing that is perhaps worth bearing in mind; the bars on board still sell DUTY FREE cigs and baccy. They are allowed to sell you one packet per adult per trip. Bad Boys and Girls of course get a pack from each bar, then send their spouses, then every time the staff rotate they hit the bars again and so manage to get a carton together. BUT those naughty boys and girls need to remember that such goods are DUTY FREE and they will need to adjust their SOT's accordingly. SH reported some time back about the problems of having a receipt that said 'Duty Free' when it was really 'Duty Paid'.

The on board free WIFI is not very good and runs over a Nordic ISP so google is in some language which has vowels with lines through them and zeros above them. But it does work well enough to surf, email and blog and, as said, it's free. Scan and log onto ‘Internet@Sea’. 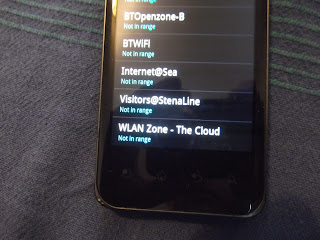 NB. It’ll log you off every 60 minutes automatically.
You arrive in Hoek at around 08:00 which means you have to kill an hour in the terminal before the shops open- and most of the cafe's in town don’t open until 10:00 it seems. That includes the Koffie Shop- for the stoners among us. Personally I can’t cope with this modern weed you crazy kids smoke so I have never been in there and can’t report on prices or quality. Although I have been informed they don't yet bar Non Dutch ID holders as the ones on the German border now do.
The Ferry Terminal in Hoek is heated and the seats aren’t too bad- most Waiting Room seats these days seem to have been designed by sadists but the ones in the terminal even have a few that are ‘undivided’ so one might stretch out and get some sleep.
There is a coffee and snack machine but there is no longer a Cafe. Back in the day when I used to go over in the 90’s, before the new terminal was tacked onto the old train station building, it had one of the best cafe’s ever and was open damn near 24/7. Now its become, of all things, a Sushi bar and doesn’t open until 14:00.
There is CNN on a wide screen and free fast WIFI in the terminal. Scan for networks and you’ll find ‘WLAN ZONE-The Cloud’, connect to it and open your browser. Register for an account which is a bit of a pain on a smart phone keypad and then you’re good to go.
So killing the hour or so between 08:00-09:00 when the tobacconist opens is not really too much of a chore.
Then you walk out of the terminal, turn right at the main road at the end of the Car park, over the level crossing then right again onto the main drag of Hoek. Cigo, the tobacconists, is then just on left after Lidls.
Easy.
Cigo isn’t a Belgium style tobacco warehouse just a simple chain tobacconists/newsagents and although he keeps a good supply of tobacco you will need to preorder. The easiest way is to email the owner a few weeks before hand. Don’t use the email addy on the cigo website -it doesn’t work. I don’t want to put his personal email address online so if you want it you can email me on jacquesketchATgmaildotcom. Or you can ring him, he speaks fluent English.
I don’t smoke GV but he assures me he can get in whatever amounts, kilos, you need and at the time of writing it is 6.5€ for 50g. He also does Amber Leaf et al.
Once you’ve got your tobacco then there really isn’t much to do or see in Hoek UNLESS you’re into WW2 coastal defences in which case there is a museum and various ruins/bunkers that can be viewed. I just tend to walk up and back down the main street for a bit, window shopping, sit in cafes and walk round comparing food prices in Lidls...sad git that I am. Then back to the terminal to board the ferry at 12:30. You could walk the Prom or the beach and there is a park I believe too.
Or visit the nudist beach.
You could get the train which goes every 30 minutes to Rotterdam but why would anyone want to? Unless container ports and concrete are yourRule 36.

To be honest the ‘run’ is a bit of chore and an exercise in killing time. So Top Tip: Take a book...War and Peace for favourite.
Posted by Smoking Hot at 12:37