How to Record ALL UKBA lnterviews 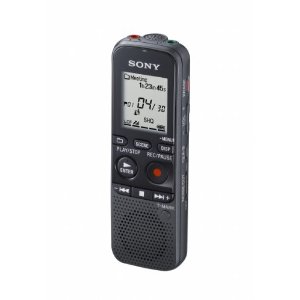 Firstly, when you are stopped by UKBA/HMRC you MUST immediately tell them that you are recording them. They CANNOT stop you as it is in their own procedures that they HAVE to follow. Make sure that you take a copy of SBC's FOI ( mirror HERE) with you in case they try to refuse being recorded by bluffing or lying to you. Another FOI  HERE The relevant paragraph is on page 8 under Excise and Civil Interviews where it categorically states:-

"Note: Officers cannot stop someone if they choose to make a video or audio recording of the interview themselves using their own equipment such as a mobile phone, video camera etc."

The reason we tell you to inform the UKBA/HMRC immediately that you are recording the incident when you are stopped by them is NOT you that are required to do so by law (you can do it covertly too), it is to make them behave! Some people use a covert backup recorder as well in case the UKBA use heavy intimidation to stop you recording ... you then have this intimidation or sometimes downright lies recorded for future reference or evidence. We cannot fault this approach.


Try to avoid videoing if possible as audio is less contentious and more than sufficient as evidence.Videoing is no more useful than audio unless you intend to put it up on Youtube. Use videos/cameras as a last resort.

Once they know they are being recorded, we've found they will not use their usual tactics  of bullying, intimidation, lying etc etc etc. The act of recording them has the same result on  them as Kryptonite does to Superman ... they lose their 'powers' and have to do everything by the book!

As for equipment to use, SBC rightly says that we recommend the above Sony Recorder BUT this is not the only device we use at the time. The Sony can record for hours and hours with no problem. The other devices we have used are  such as spy cameras, i-phone etc all have a major disadvantage ... if the interview goes on for a long time (Zaphod 4+ hours), the spy cameras, i-phones etc will run out of battery ... the Sony will NOT.We did a test and it ran for over 12 hours and it still had battery life left.

lt's no use recording something so important only to find you missed half of the interview interrogation because the battery ran out!

SPREAD the word people and let's all MAKE the UKBA/HMRC  BEHAVE!

Us Cross-Border Shoppers are no longer defenceless against the illegal and unjust tactics used by UKBA/HMRC. We can take away these tactics that UKBA/HMRC have used for years to rob people of their goods and vehicles. This recording of them is a game breaker ... USE IT & TELL OTHERS about it.

Let's show them that they are ACCOUNTABLE to us, the public! Let's FORCE them to abide by the LAW ... as they should have been doing for years!


We've had reports of some UKBA officers saying the 'chat' is not an interview. Whilst not the A-J's main interview, it is certainly part of the interview. lf your stop goes onto the A-J's, the 'chat' is recorded in their notebook with what questions they asked and what you replied. You are then 'invited' to sign this as a ;true and factual account' which will then be produced if you end up in court along with the notebook of the A-J interview, This 'chat' therefore is indeed part of the interview. ln the recent case involving Mr and Mrs Donny they did exactly that and produced the 'chat' and the 'A-J' as evidence. So either UKBA either have a 'chat' and don't record it in their notebook themselves or if they do record it in their notebook l shall audio record them. They can't have it both ways. l'd argue the point with them till hell freezes over! However, l would state that if the 'chat' did not lead to the 'A-J's l would erase the recording in their presence.


We have (and continue to do so) record all UKBA interviews incl 'chat' with no problems. Record everything! lt is your right!


To further prove that the 'chat' is indeed part of the interview and hence 'evidence' to be used against you in appeals or court ... here is an extract from an FOI :-


The officer stated that in view of these quantities he wished to ask you some further questions but that you were not under arrest and were free to leave (without the goods in question) if you chose to do so. You elected to stay and answer further questions. Before continuing, however, the officer explained that he needed to record events thus far in his notebook. I should explain that officers are required to make and keep a notebook entry of all such challenges. Notebooks form evidence in the event of a case being appealed or (as on this occasion) the subject of complaint or other action, and they should be completed either contemporaneously or if that is not possible, immediately after a discussion/action. 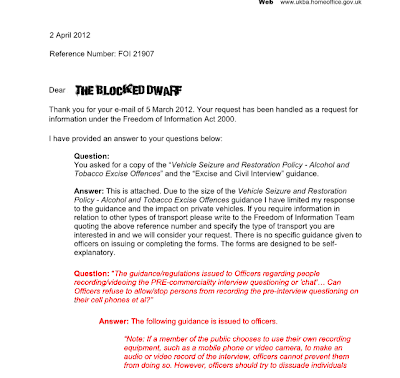 lf you need more advice, please get in touch with us  by joining our FORUM

New comments are not allowed.