So they did as Camerloon said and went ahead and held a party in the park without Police/Council permission. 1000's turned up after seing it advertised on Facebook. They came with an abundance of alcohol, ciggies and the more thoughtful brought  music as well.. As the day progressed fights started to break out between the alcohol fuelled revellers as Scottish tradition demands. The police then arrived to join in stop it. Reaction of the crowd to the police was like when you try and break up a fight between a man and wife ... they then both turn on you.

When it was all over many hours later, the bruised, bloodied and battered particpants staggered and limped (some carried or dragged) their way home. The general consensus of opinion was "  What a fucking great day!" << (English translation) 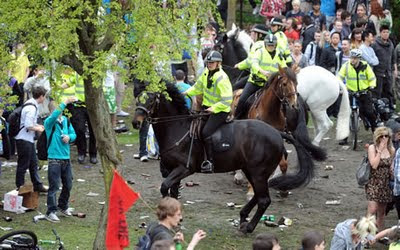