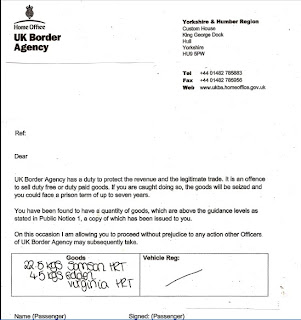 l'm going to blog about this very shortly. l'm waiting for a scan of the official HMRC/UKBA form he got issued with stating the amount he brought back home. Thought that would be a little more impressive than just blogging about it. lt will validate the post m'thinks. :) Ties in with the P&O post

There's a great deal of hearsay/rumours/false information on the net regarding what you can and what you can't bring back for personal use from the EU. Most of it seems to come from what people have heard from 'the man in the pub' (those that are still open) or the 'failed' shopper who was totally unprepared when stopped by UK Customs.

The legitimate shopper is wrongly associated by default with the shoppers that are not legitimate. HMRC see no difference between shoppers at the border ... period. lt is up to the legitimate shopper to be prepared for this. lf he doesn't he will be like a sheep in a pack of wolves. The rights or wrongs of this do matter but it is simply a fact of life that at the moment this is the way it is. Will it change? ... l doubt it.

So what you are left with is a potentially threatening situation that you have to deal with. You will be spending not an unsubstantial sum of money in order to save yourself a similar amount. lt's just a case of basic economics. l find it strange that many people (mostly non-smokers) can't see the logic of this. Yet, if you say to them 'If you could buy petrol at 50p a litre and can bring back as much as you like for personal use, how much would you bring back?' ... a light seems to be turned on and understanding then comes to them. This then puts into context the HMRC's 'guidelines' ... using the petrol example, if HMRC said their guideline was 160 litres yet you could afford and transport 1600 litres ... everyone would bring 1600 litres. There's no difference when purchasing tobacco/cigarettes!

There are some HMRC Officers that understand this but they are in the minority l've found. Too often is the mindset that they must try and confiscate everything that is brought into the UK regardless of the circumstances. To this end, these officers will try to find any excuse to do this. One of the most widely used is 'How often do you travel or have travelled?'. This is based on the assumption that everytime you travel abroad you bring back large quantities of tobacco/alcohol.

lt's as though you have sewn on the arm of your jacket a symbol that ostracizes you from the rest of society. You are harassed, intimidated and victimised for being a smoker. The only sympathy for your plight comes from other smokers. Your rights and freedom to travel are constantly infringed. Whole coachloads are marched off coaches to be interrogated interviewed. lf you dare argue back they will interrogate interview you further ... till you are blackmailed to either leaving your goods or missing your coach and then left stranded. lt matters not that you could even be a WW2 vet that fought against such tyranny ... you are a smoker! Worse still is that if you are in your own vehicle it could be also confiscated simply on the whim of a HMRC officer ... and left stranded in another country. This is a whim mind, no evidence is necessary ... they simply only have to 'believe' that you are guilty. The 'believe' scenario is nothing more than an attempt at justification for any form of victimisation they deem to inflict upon you. Why? ... because you are a smoker!

Don't let them do this! Fight back!  lf you are going abroad to buy your alcohol/tobacco ... go prepared and not with just a hope you won't get stopped. Question them, ask for their name and number (often covered up by flak jacket), don't be intimidated, question everything and most of all, don't be subservient. All it does is empower them more. Take control from them ... you do have rights so use them. They may put over to you that they have the power of life and death ... but they haven't. They only have if you let them so it's up to you not to allow them to intimidate you. lf you don't know how to prepare yourself ... find someone who does and learn from them.

HMRC may even give you a certificate proving you know your rights ... see pic! :)
Posted by Smoking Hot at 01:15