"Give us your tobacco" demand gets "ΜΟΛΩΝ ΛΑΒΕ!" reply. 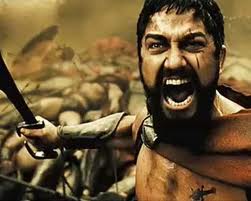 Two little words. With these two words, two concepts were verbalized that have lived for nearly two and a half Millennia. They signify and characterize both the heart of the Warrior, and the indomitable spirit of mankind. From the ancient Greek, they are the reply of the Spartan General-King Leonidas to Xerxes, the Persian Emperor who came with 600,000 of the fiercest fighting troops in the world to conquer and invade little Greece, then the center and birthplace of civilization as we know it. When Xerxes offered to spare the lives of Leonidas, his 300 personal bodyguards and a handful of Thebans and others who volunteered to defend their country, if they would lay down their arms, Leonidas shouted these two words back ...  ΜΟΛΩΝ ΛΑΒΕ! (Molon Labe) They mean  “Come and get them!”

Today we echo those words in defiance of the Governments new stategy on tobacco control. The UKBA are to implement reduced guidelines on cigarettes and tobacco bought legally in the EU. Simon reports it here and the Guardian here. They will announce that the guideline of 3200 cigarettes will be reduced to 800 cigarettes and tobacco guideline amounts to be 1kg from 3kg.
Firstly it has nothing to do with duty free, it's about EU duty paid goods. Duty free remains the same as it has for years and applies to non EU purchases. MSM can't even get that right and you'll note that comments are not enabled on the Guardian article so people like us cannot inform the public as to their rights.One would thing the MSM are working for the UKBA!
Guidelines are simply guidelines and nothing more. You still have the same rights to purchase as much as you like for personal use .... this has not changed! Don't be intimidated by them!
So folks, don't let the UKBA get away with this. Stand up for your rights and fight them but make sure you are prepared for the fight and be prepared!
Let the UKBA know the meaning of "ΜΟΛΩΝ ΛΑΒΕ! "
Posted by Smoking Hot at 11:24