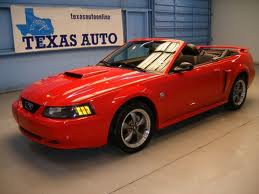 I'd been driving since late afternoon down the I-35 South from Minneapolis, Minnesota  in a rented 4.6L V8 red Mustang GT Convertible (it had only 900 miles on clock). lt was mid-summer and l had the hood down until dusk came and the temperature dropped. Until then it had been blazing sunshine and hot. Lynryd Skynryd's greatest hits was blasting out ever since l bought it (along with some wrap around biker shades) at a truck stop and l'd had the hammer down as they say in the States. I was also wearing a bandana to protect my shaven head from the sun (good way too cool down, just soak the bandana in water) Large coffee in the cup holder, a few cans of Coca Cola, pack of Marlboro ... life didn't get much better than this! Perfection would've been a babe in the passenger seat ... but hey, l wasn't complaining.
Some will accuse me of posing ... damn right l was!

As l continued driving through the night, hurtling past the trucks lit up like Christmas trees, l began to get tired. lt was about 1.30 am and l was deep into Iowa so l decided to look for somewhere to stay. A few miles further down the road l began to see signs for Winterset, Iowa ...Birthplace of John Wayne. . It brought back fond memories of watching John Wayne movies with my late father so l decided then and there to go to Winterset. l pulled off the freeway and a few miles later arrived in Winterset and drove down John Wayne Drive. l'd expected a larger town but it was small ... population 4764 and was to find later predominately white. Even now it only has 13 Asians, 7 Native Americans and 3 Blacks. Crime is almost zero and they've had just 4 traffic fatalities in over 10 years or more ... and they were all down to drunk drivers.

Winterset at 2.00am in the morning is a ghost town and there was a distinct lack of motels. l then spotted a car ahead of me stopped at the traffic lights. lt was a police black and white. Pulling along side of it, the policeman turned to look at me as l powered my window down. l thought he was alone but suddenly a German Shepherd dog reared up from his back seat. lt didn't bark at me ... it just stared. The policeman also powered his window down. l realised later that what l was doing was not particularly the thing to do. l'm sure the American police are very wary of such things. His face showed no emotion and he probably had already reached for his gun.

His stern look disappeared when he heard my accent as l asked if he knew anywhere l could stay the night. 'Are you British?' he asked, l said yes. He grinned and then directed me to park up in the adjacent shopping mall parking lot. We both pulled over and l got out of the Mustang as he did his police car. l greeted him and reached for my Marlboros, lit up and then offered him one. He muttered he shouldn't really but accepted my offering.

He told me there were not many motels in the area but said if l waited a while he'd make a call and see what he could do. He called the police station on his radio. He told his friend Mac that he had a guy from England looking for a place to stay the night so would he call Jimmy to see what he could do. l had no idea who Jimmy was but l did know it was past 2.00am in the morning and the police were just about to wake him up.

We continued chatting about where l was from, the usual associations Americans have with England ... WW2 and so on. Whilst we were doing this he got the other participant out to meet me ... Duke, his dog. l kid you not, it had to be Duke didn't it? His radio then burst into life, it was Mac and he said that  Jimmy did have room for me. The policeman, or l should say Cole as we were on first name terms now, started giving me directions but then changed his mind and said to follow him.

The motel was just outside of town and we were met by Jimmy. l thanked Cole and then remembered l was running out of Marlboros so l asked him where l could get some. He said the cheapest place by far was the Indian Tobacco Shop but they were closed now. He then reached into his car and produced a pack of Marlboros and gave them to me. l asked him how much and he said $3 but when l looked in my wallet l had only $20 bills. Cole had no change and neither did Jimmy. Cole then said it was no problem and to just drop it off tomorrow at the Northside Cafe in town. l asked wherabouts it was and they both laughed. lt was another of Winterset's attractions, it was where Clint Eastwood used in his Bridges of Madison County film with Meryl Streep. Not only that but other locations too and all the bridges round the town. I laughed and apologised for not knowing and promised to drop off his $3 the next day. With that Cole said bye and drove off. Jimmy checked me in and l crashed out.

The next morning l woke up and had coffee and a smoke whilst l read all the tourist literature on Winterset. l decided to stay for another night so l could have a look about. l went down to the town centre and there was Northside Cafe in the town square .. you couldn't miss it. l went in, ordered a coffee and sat at the bar where Eastwood sat in the film. l asked the waitress if she could give Cole the policeman the $3 l had for him. She said there was no necessity to as he was in the backroom of the cafe.

l was just expecting to see Cole in the backroom but he was far from alone, it was some sort of town meeting. l apologised and turned to go back out. They wouldn't let me, Cole introduced me along with the story of the Mustang and the Brit pulling up alongside of him. l stayed with them, having coffees brought me, smoking and talking about my country and theirs.After about an hour l finally left Northside Cafe accompanied by Cole and Duke (who l hadn't noticed until we left). l asked Cole where the lndian Tobacco Shop was but he said there was no need. He took me over to his black and white and took a carton of Marlboros out the back. He said he'd been that morning for himself and if l wanted a carton he'd let me have them or he'd split them if l preferred. l paid him $30 for the carton, thanked him, said farewell and left. 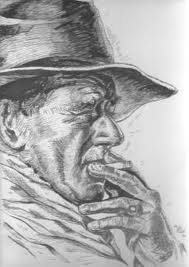 I had a truly great day in the glorious sunshine driving around in the Mustang. l visited John Waynes House, the bridges, the farmhouse used as Streep's home in the film (well the remains of, because an arsonist had set fire to it in 2003), other bridges and sites that weren't in the film and met and talked to many friendly people along the way. As evening approached l pulled into the parking lot of the motel. After freshening up l ventured into the bar next to the motel, had something to eat ... a steak! ... a real steak that only Americans can do! Liberal amounts of JD and beer chasers turned into copious amounts and last thing l remembered about the bar was playing 8 ball pool with the locals.

The next morning after coffee and a smoke or l should say coffees and smokes, l loaded up the Mustang, dropped the hood, fired up the beast, turned the sounds up and set off to McCalester Oklahoma. Sadly in Missouri my relationship with the Mustang was to become the beginning of a premature end. l hit a pothole on the freeway (a freeway! not some poxy road ... a freeway!) near Kansas City interchange to St Louis and smashed the front alloy wheel beyond repair. l had to change to the stupid emergency wheel that's not much better than a bicycle wheel and limp on to McCalester. lt was early hours of the morning when l got there. The next morning revealed the rear tyre had now gone down too. 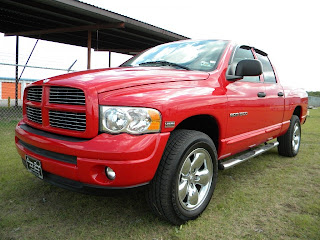 The rental company was ok but because it was McCalester Oklahoma they didn't stock Mustangs or anything like it. All they had were saloons, nice saloons but no fun. Then l had a brainwave .... a pickup. So l ended up with a 5.7 L Dodge Ram, fully-loaded ... a beast of a different sort but a beast none the less. Fun too, a different sort of fun but still fun.

Winterset wasn't planned, it was off the cuff but it will remain one of the most cherished memories of my life.

l hope that you too will enjoy such an experience in your life or have experienced such already ... and with that l'll leave you with the actual 4.6Litre V8 Mustang GT Convertible .... and Freebird!